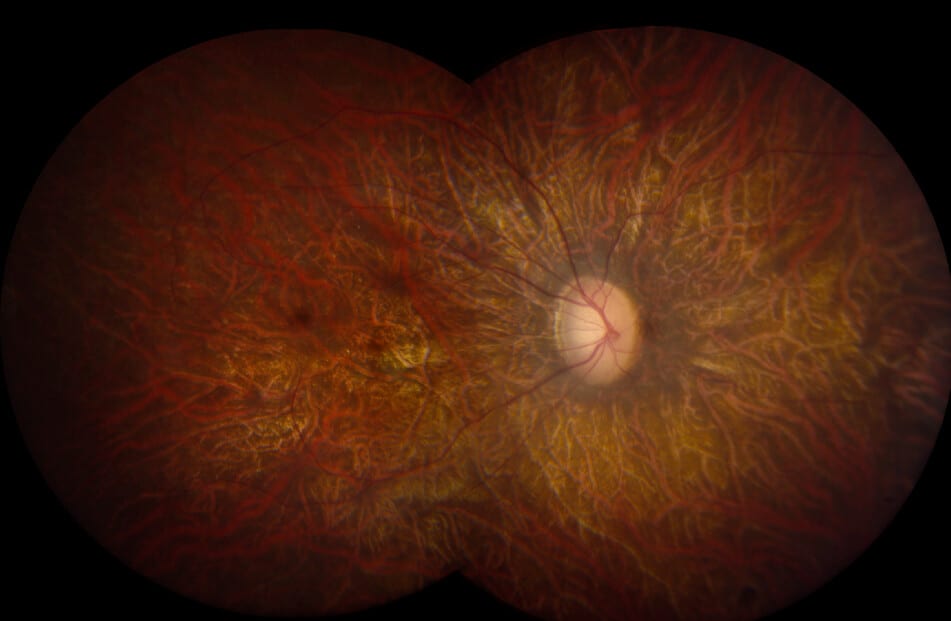 Officially called Leber Hereditary Optic Neuropathy,[18] Leber’s Syndrome is a mitochondrially inherited degeneration of retinal ganglion cells and their axons – long threadlike nerve cells extending to the optic nerve. While it typically affects young men, LHON is inherited maternally, since we get out mitochondria solely from our mothers’ eggs in the womb.

Leber’s usually presents with acute onset of visual loss, first in one eye, then the other a few weeks later; however, in 25% of cases the vision loss can occur in both eyes simultaneously. The disorder then devolves to severe optic atrophy and a permanent decrease of visual acuity.

In the acute stage, affected eyes demonstrate a fluid-filled appearance of the nerve fiber and enlarged or otherwise damaged peripapillary vessels. A pupillary defect also can occur, as the eyes struggle to capture more light.

In addition to bilateral acuity, I had two other symptoms that alarmingly aligned with Leber’s: impaired color vision and the specific locations of my scotomas (blind spots). Mine were cecocentral, meaning they originated from the natural small blind spots we all have (the point where the optic nerve connects with the eye) and enlarged exponentially over time.

Had I had Leber’s I’d likely be nearly blind by now. Luckily, I did not.

After almost two years of uncertainty, the doctors arrived at a sort of diagnosis by process of elimination: Dominant Optic Atrophy.[19]

Also known by its unsettling acronym, DOA, Dominant Optic Atrophy is a rather loosely defined condition characterized by degeneration of the optic nerves. The term “dominant” alludes to its hereditary nature – a clue to doctors because my father has had mild cases of optic neuritis (inflammation).

DOA typically starts during the first decade of life, with affected people frequently developing moderate visual loss and color vision defects. Its severity varies widely – a common issue with eye disorders that also makes them more difficult to pinpoint – with visual acuity ranging from near-normal to legal blindness (which is 20/200–corrected).[20]

Dominant Optic Atrophy remains a bit of a medical mystery: it can be caused by a mutation in any of several genes, some of which have not been identified. Like most eye diseases, there is currently no way to prevent or cure it.

Unfortunately, DOA also has a “Sword of Damocles”[21] aspect to it, meaning it can pause and restart without warning. Luckily, it’s been more than 15 years since I’ve suffered any demonstrable vision loss. However, the prospect of losing more of my precious eyesight will, like my diseased optic nerves, be in my head for the rest of my life.

11 Health Secrets Your Hands Are Trying to Tell You